This repository hosts the NeuroML conversion of the Migliore et. al. (2014) model of the olfactory bulb. The original NEURON model has 125 glomeruli, 625 Mitral cells (MCs), and ~125,000 Granule cells (GCs). This project converted the original model channels, cells, synapses, network connectivity, and odor input into NeuroML format. Each converted component has been individually validated by comparing their responses to the original versions. The conversion error of the channels and synapses is <1%, while cell and network conversion error is <5% (see Validation below). Scaled down network model (5 MCs) is hosted in this repository, while larger versions can be obtained via the export scripts (see Exporting below). Click here to view an interactive visualization of a 5 Mitral and 10 Granule Cell Network 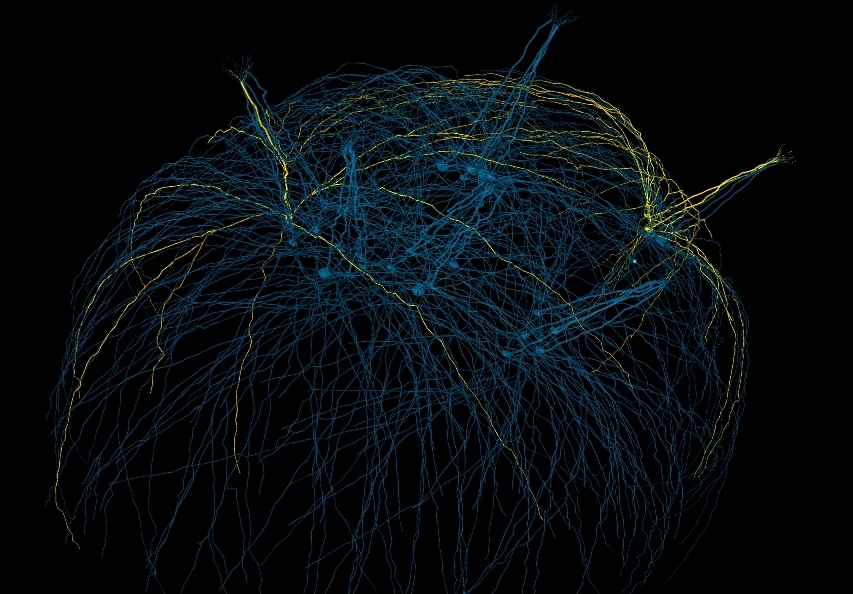 3D rendering of the converted network consisting of 30 Mitral cells 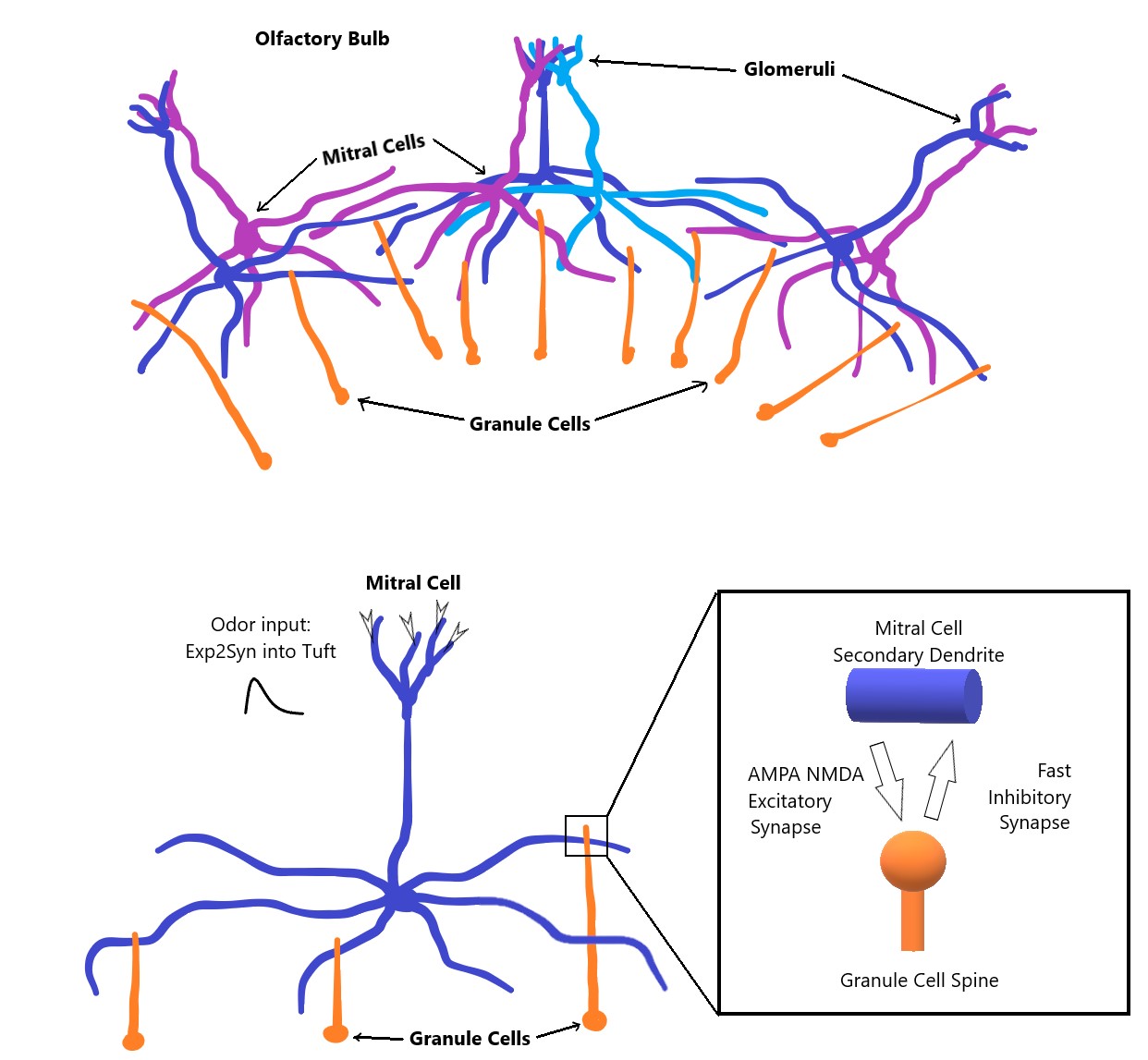 The original model depicts a small patch of the mammalian olfactory bulb, consisting of 125 glomeruli with 5 MCs each. Each MC is connected to several hundred GCs via dendro-dendritic synapses. Each GC connects to one MC. MCs are not connected to each other. Scaled down, NeuroML versions of the original model can be found in the NeuroML2/Networks folder.

Mitral and Granule cells are connected via dendro-dendritic synapses. Segments of the MC secondary dendrites connect to spines located on GC primary dendrites via the AMPA-NMDA excitatory synapses. A connection in the reverse direction from GC spines onto the MC secondary dendrites is formed by the Fast Inhibitory synapses. Both synapses implement spike-timing dependent plasticity, which strengthens the synaptic weights when incoming spikes have short inter-spike intervals, and weakens the weights when the intervals are long. The converted synapses can be found in the NeuroML2/Synapses folder. Networks that implement the above connectivity can be found under NeuroML2/Networks. The connectivity can be visualized via the OSB Explorer.

Network input is provided by stimulation of MC glomerular tufted dendrites via double exponential synapses with peak current values taken from optical imaging odor maps of a mammalian olfactory bulb. The synapses have relatively long rise and fall time constants (50 and 200 ms respectively). Networks that implement the "Mint" odor of the original model can be found in the NeuroML2/Networks folder. Files in the folder that end with "OdorIn.net.nml" implement odor stimulation, while other network files implement un-stimulated networks.

Code implementing these protocols can be found under the /test folder. Specifically, see protocols for: Channels, Cells, Synapses, Networks

A script that will perform the comparison tests for all model sub-components and networks can be found in /tests folder, and can be executed with the following command: python runsuite.py

This model also implements automated tests that ensure no breaking changes have been inadvertently introduced. They validate NeuroML models against NeuroML schema and verify that the spike times for the sub-models match the expected values. These tests run every time code is checked into this repository.

The following image, if shows "passing", indicates that these automated tests did not detect any issues with the NeuroML models.

Use the steps above to run other models defined in other LEMS*.xml files.

Scaled down networks in this repository can be visualized via the web using the OSB Explorer by clicking on one of the Networks listed under the OSB Project Models tab.

The models can be visualized offline by converting the model to NEURON (see steps above) and using the built in ModelView tool.

NeuroML versions of network models with arbitrary numbers of Mitral and Granule cells (up to the counts in the original model) can be created via the use of the export script.

The conversion error of the model can be further reduced by resolving identified issues. If you find additional problems or issues, please create a Github issue at the issues page.

Conversion of the model to NeuroML2 has begun

This model was originally developed in: NEURON

The code for this model is hosted on GitHub: https://github.com/OpenSourceBrain/MiglioreEtAl14_OlfactoryBulb3D.git